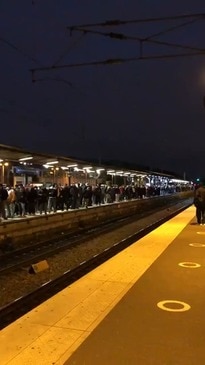 Paris Metro platforms have been seen filled with morning commuters on Thursday, October eight, at the same time as new coronavirus instances in France surpassed 18,000 for the second day in a row. This footage was taken on the La Courneuve-Aubervilliers station on Thursday. Based on the RER B line on Twitter, trains have been delayed throughout rush hour because of gear issues, resulting in overcrowding on station platforms. As of October eight, France had reported 626,502 confirmed instances of the coronavirus and 32,211 deaths. French well being authorities reported 18,746 new confirmed COVID-19 instances over 24 hours on Wednesday, October 7 – in contrast with 10,489 the day earlier than. Credit score: @Freud_is_alive by way of Storyful