Buhari’s pledge got here after two days of around-the-clock protests sparked by a video displaying a university pupil being killed by officers of Nigeria’s Particular Anti-Theft Squad (SARS).

The group has been accused of brutality and abuse of energy up to now, however the allegedly unprovoked killing of Jimoh Isiaq, a pupil at Ladoke Akintola College Ogbomoso, throughout a peaceable protest has set many over the sting, PM News Nigeria reports.

The police division and Commissioner of Police initially denied police involvement within the killing,  however the Chief Safety Officer and Governor of Oyo State Seyi Makinde confirmed that the younger man was shot throughout a peaceable protest, PM Information Nigeria detailed.

Following the incident, the president introduced SARS will likely be dissolved “with rapid impact.”

The assertion was supported by the Nigerian Police Drive, and the Minister of Police Affairs who said, “I urge Nigerians to see the disbandment of SARS, as authorities’s dedication to deepening relationship between Nigerians and the police, for higher service supply.”

Then, on Monday morning, President  Buhari addressed the nation in a televised statement, saying, “We additionally deeply remorse the lack of lifetime of the younger man in Oyo State in the course of the current demonstrations.”

The president  concluded, “I’ve directed that the circumstances of his dying needs to be totally investigated.”

Following his press convention, hundreds of Nigerians took to social media to specific their discontent over the state of affairs, lots of them saying it’s too little too late.

The social media firestorm surrounding the resurfaced #EndSARS hashtag shouldn’t be a brand new idea, as many Nigerians have been utilizing it since 2018. However, due to the newly emerged video of Jimoh Isiaq being gunned down by officers from the SARS unit, it’s regaining consideration, the Guardian detailed.

Many individuals are utilizing its newfound reputation to take the chance and share private tales of police brutality from the unit’s officers.

One Twitter user said she was threatened by the duty pressure throughout a protest. Another user stated she was overwhelmed and her glasses have been damaged after she was confronted by SARS officers accusing her of stealing her personal private belongings.

“The Nigerian authorities would fairly let folks die than change all the system,” she concluded.

Others on Twitter have been fast to level out some holes within the President’s plan to disband the unit, noting that the entire officers servicing will likely be deployed to different police instructions, and new police association for tackling theft will “be introduced quickly,” according to the official Twitter for the Nigerian Police Force. 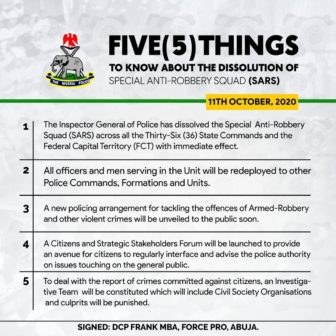 Picture by Nigeria Police Drive through their official Twitter.

Many have seen this as including gas to the hearth, saying that redeploying current officers into different models is simply “one other disguise to carry them into play once more,” and that Nigerians “don’t need them simply rebranded and positioned on [their] streets once more, please.”

Amnesty Worldwide’s director in Nigeria, Osai Ojigho, informed the Guardian that the Nigerian Police Drive’s announcement “falls wanting calls for for accountability and justice for abuses dedicated by the unit and police generally.”

Ojigho concluded, “The police authorities should state strongly the concrete steps they are going to take to make sure all officers alleged to have dedicated human rights violations are investigated and dropped at justice.”

Ikechukwu Onanuku, a musician in Lagos, who led chants of a thousand protesters, informed the Guardian “We received’t cease, we’ll be right here tomorrow and the subsequent day and subsequent 12 months till there’s change.”